The earliest successful websites often looked like big lists. That’s because in the early days, people weren’t totally sure just what the World Wide Web was supposed to be for. So they started out by making lists of all the cool stuff that already existed on the web. As if by magic, their new lists became the new web pages. As the web got bigger, their lists got bigger, and so the first runaway-success websites were really just huge lists. 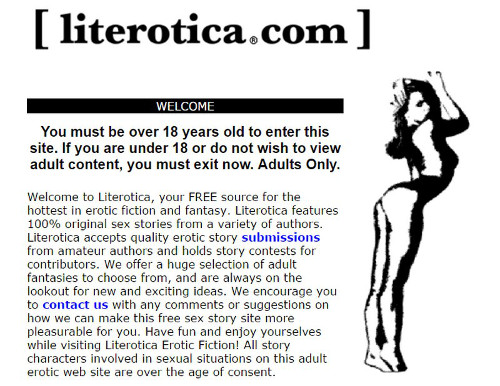 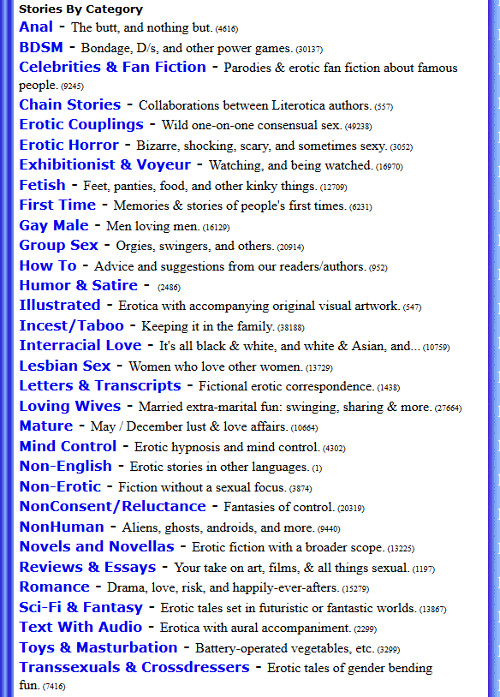 So how are the stories? That’s truly the most important question, isn’t it?

I propose that it’s time to for me to depart from tradition.

Don’t go picking categories randomly lest you end up like I did, unhappily in the midst of a story about “That 70s Show” called “Red Rules the Roost” in which everyone in the whole damn family has sex with each other, including the old dad Red. Yes, RED. I contacted my friend, a cool Bay Area techie chick, one of many women who’d recommended the site, to say basically, “WTF? RED?!” But she was undeterred in her Literotica love.

Maybe Salon’s writer does not ship Red Forman and his entire family, but the writers at Literotica will gleefully ship pretty much anybody; there are more than 9,000 stories in the Celebrities and Fan Fiction Stories Hub alone. Kelly and Regis? Jeanie the genie and Major Healy? Literotica’s authors ship them all, and have got you covered: 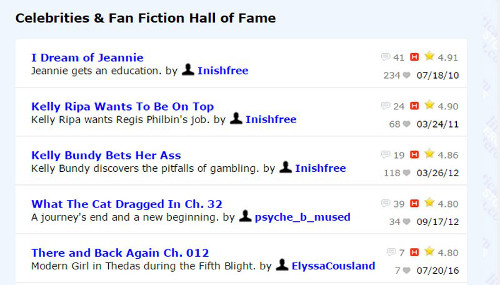 But we were talking about the quality of the stories, and about tradition, and about my departure from tradition in writing articles like this.

The Literotica story archive is close to twenty years old as I write this. It must have more than 100,000 stories in it. Maybe it has 200,000, there’s not a grand tally. Anyway, it’s a big bunch of stories. A metric buttload. TOO MANY STORIES TO READ. You’re not going to read them all in your lifetime; neither am I. There’s nothing meaningful we can say about “the Literotica stories” as a class. The only quality metric that matters is the quality of the tools for searching through the stories and finding the ones that we like.

And here, Literotica shines. The site’s search tools are superb. In addition to the detailed categories in which the stories are presented, the keyword search tool has an “advanced search” dropdown that allows searching individual story categories, story titles, and a system of story tags. What’s more, each story category offers a “Hall of Fame” listing that ranks the 250 stories most popular with other readers, which offers a fast way to leverage the wisdom of crowds and get straight to “the good stuff” in your category of interest.

So the tradition I’m going to depart from would be to dip at random into a large category (such as BDSM, with 30,000 stories in it) and find something terrible, to serve as a warning about the overall low quality. I actually did do the “dipping at random” thing, and I did in fact find something kinda bad if not outright terrible. The story I found is by random dipping is a poorly-wrought tale of a medieval wife whose husband “punishes” her by having her exposed in the public stocks where she’s raped in the dark by parties unknown. Which could be fine; it could even be fine that she likes it and decides she wants more such punishments, if only her emotional journey to this realization were somehow revealed. But instead, the story is presented as “bad thing happens, worse things happen, gosh, in hindsight protagonist decides she enjoyed them” which is just sort of a narrative mess.

So let’s set out to find a nice little spanking story with a historical theme and a bit of sex. Keep the search strategy simple: go to story search and type in “spanking historical“. Start skimming. Here’s one that pops up on page three of the results, also featuring a pillory, let’s look at it:

I won’t spoil the story for you, but it’s much better than my randomly-chosen bad example. It’s a modern tale of light-hearted couples at play, and though the spanking I was looking for only gets threatened and not actually delivered, the overall story is sexier and better-written, featuring characters with plausible reactions to each other and to events.

So, back to Literotica as a whole and the only question that matters: how are the stories?